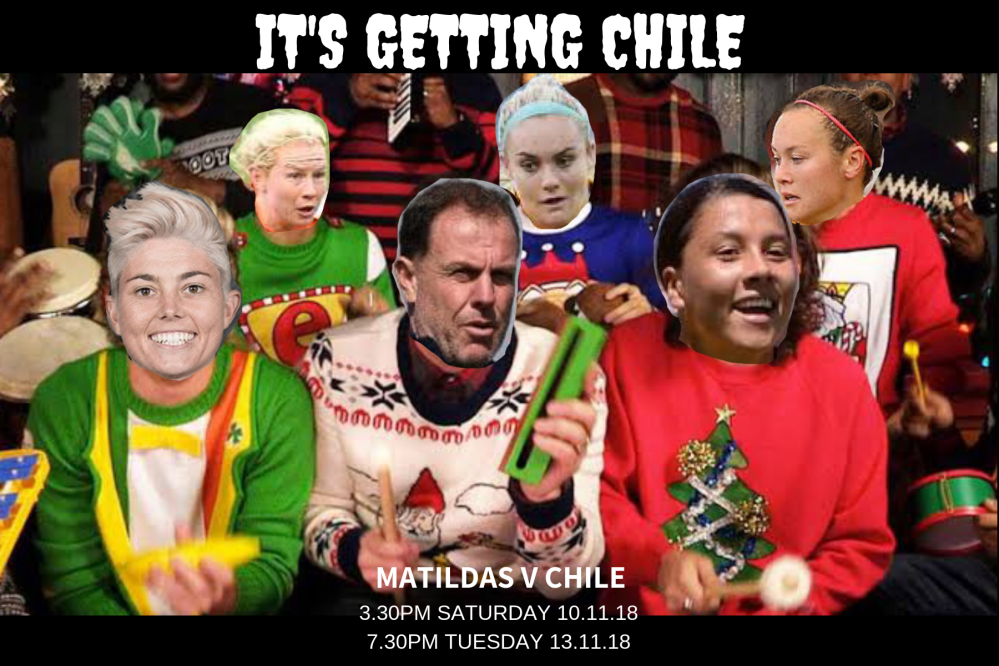 I like to think of myself as an organised-ish person. This is because whilst I only generally have an idea of what is going on day-to-day most weeks and manage to skate through with only putting in half of what I really ought to put into my phone’s calendar, I like to prepare for some things in advance, particularly when that thing is happening surrounded by a sea of other happenings. My preparation for this Chile preview was one such thing.

Looking at my calendar, and knowing full well I’ve only put in half of what I’ll actually be doing in there, I knew watching some Chile games close to writing the preview would be difficult. What with having my exam death period of 5 days followed by galavanting around the southern eastern states, facing the risks of not accessing solid internet and football watching overdose, I knew this was one of those times I could prepare in advance. So a few weeks ago, in my new house, on my bed that is just a mattress because I’ve yet to have the time to get a bed frame (if you know of a double bed frame available in Hobart over summer feel free to hit me up honestly), I watched Chile play. A very good way to acquaint the room with me, it’s new football crazy resident. This is what I learnt.

Chile love to play. If given the time and space, Chile will come at a side with good movement and technical ability to hit the passes the right way. So just as an opener, if the Matildas decide for some unknown reason to sit back and merely park the bus, Chile will be stoked and move the ball around us. A happy Chile here, but hopefully for the love of god won’t be the Matildas plan of attack.

High press. Chile love a high press with four or five forward when their opposition play out from the back. The Matildas have been super up and down with playing out of the back recently, largely this depends on whether Kennedy is in or out of the backline. If we play some sloppy passes in the back, Chile will be putting the pressure on and have the pace to really capitalise on defensive mistakes. Personally my plan of attack when the ball is in our final third? Ping it forward to the midfield, or a long ball over the top. With the high press, Chile leave a lot of space for the midfield. The midfield should be our best asset with the players we have there no matter the game. The passing ability of Kellond-Knight, Van Egmond, Gorry or Butt is all to drool at, and whichever combination is picked needs to make sure they see plenty of the ball and utilize all the space that will open up if Chile continue their high press. The long ball over the top? Well with the pace of Kerr, Logarzo, Foord and LDV, plus others likely to come in, this is totally an option if Chile play with a high defence to shorten the midfield and limit our midfielders. Either option is good for the Matildas and will hopefully provide entertainment.

Dead balls. Against every side the Matildas have shown a brilliantly handy knack of scoring from dead balls, Polkinghorne’s equaliser against England is case in point (extra points for good defender goal). Meanwhile Chile struggle to defend against deadballs, when the ball is in the air and organisation is missing. They’ve got a talented goalkeeper in Endler, however if the Matildas don’t manage to score at least one goal through a dead ball situation by the end of the 180 minutes played over Saturday and Tuesday I will give up chocolate for the summer. For me this is a sure thing. Chile may have worked on it recently, but when they came up against their South American counterparts and the US in a friendly, this is where they were the most exposed defensively.

Flying fullbacks and fluid formations. Chile appear to have a super clear plan of how their team looks in attack compared with on the defence. On attack, they look to spread the ball wide and draw teams out. Then, on the other foot, when defending they are more than happy to defend narrowly, restricting their back four to the width of the penalty area. Considering the Matildas are on home ground and coming into this the higher ranked side, it is likely we will see Chile defend slightly more than the attack. For the Matildas, this means there will be plenty of space to exploit on the flanks, whilst it could be pretty congested through the centre if we only go direct. With a 433, the main purpose is to expose the width with those wide forwards. Recently against teams who stuck to inside their penalty area we have struggled before, case in point being during the Asian Cup when stats said it should’ve been a landslide victory, but reality said we couldn’t get any decent attempts off. This is where the interest for these two friendlies and World Cup preparation will be at. If the Matildas can figure out a way to break down a side parked in the box, and really use the creativity of the midfield and talent on the flanks, it’ll be pretty special and something to watch.

Anyway, that’s heaps on Chile and how the Matildas will match up. Part of my summer gallivanting is watching the Matildas, so I’ll be at both games. It’s going to be a pearler. Make sure to tune in on SBS, FoxSports or MyFootball to watch both games.