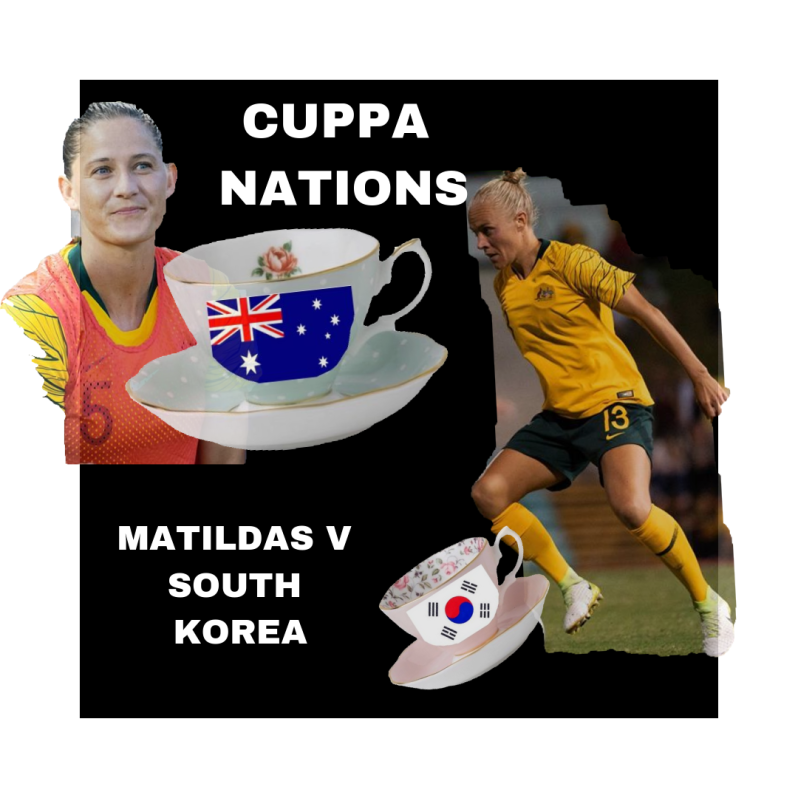 You can’t ask for a better evening out on the football park than a 4-1 win over South Korea. Yeah sure, it’s no win in a major tournament. Heck, the way both teams would approach a match against each other in a major tournament would alter significantly, especially if it was a matter of points and not purely do or die. But still. This is an impressive win, meaning we’ve got to celebrate this victory.

So here’s a one eyed version of the game. I could give you a bit more on South Korea, but I’ll save that for a World Cup preview yeah.

Alleway and Butt. I know, I know. Probably couldn’t select two players who are more different than one another. They do have something in common though, they were excellent against South Korea. Alleway in particular has had doozies for the Matildas recently. Here, today, she found the form that has kept Victory’s defence so fit and fine looking this season. Suddenly there was confidence in her play that’s been missing as long as my footy’s use to be when they were hit over the fence into the channel. Whilst the passing around the back has mellowed somewhat to what we’ve played in the past, an area Alleway looked shakey in, the passes that were had were all completed and did the goods. Add in a couple last ditch tackles, and it was a very good day in the office for the centre back. Likewise for Butt. This match just cements recent performances in the last six months or so that makes her name the first to put into the midfield right now. She was dynamic, shifting between attacking midfield and centre forward with Kerr, demanded the ball and worked with Kerr and Raso beautifully. Not that long ago it was a matter of whether Butt fit into the system, now it’s we shouldn’t be playing without her. Brilliant.

Positive Play. Oh how I’ve rued our lack of positive play in the past. How many times have we seen the Matildas hit the flanks with no real support or idea on what to do next? Let alone how often we kicked the ball around defence “waiting” for the opportunity to hit us in the face like an unwarranted bird pooing on our head. Now we look to have a plan, and that is go towards the goals. We’ve been able to mix it up, going down the flanks at time or straight through the guts. Add in a couple long balls with the otherwise small, one/two touch passing, and there is the mixture of attack you expect from a side wanting to be the best in the world. Perhaps the most obvious and slight adjustment to our play is the first touch being positive. Whether that’s a first touch to pass it on to a more positionally advanced player or just getting their body in position towards the right set of goals, both are equally exciting.

The Negatives. Ok. Just two real quick negatives to quickly cover. One. Van Egmond’s best play was in the second minute, a breathtaking diagonal, half field ball in behind the defence. Other than that, she was lost. Her game relies on her passing ability and range. Unfortunately she’s not bringing it. It was forgiven when she was played out of position, however currently, Van Egmond is playing in her natural position. Right now she is tanking. Hopefully she can find her bag full of tricks soon, or something’s gotta give. Secondly. As an old record, I shall repeat again, Carpenter is not the fullback we need for the World Cup. Given, Australia apparently loves to put in super talented youngsters at fullback as a baptism of fire or to “blood” them into the side. But seriously, a world class side cannot put a player clearly more comfortable further up the pitch, where her runs can cause havoc for defences, and her lack of defensive smarts are less exposed. Carpenter deserves better. The Matildas deserve better. Otherwise we’re going to be exposed down the right flank once again, like South Korea looked to expose a number of times.

Reply to the Equaliser. It’s a simple thing, but when Korea found the equaliser, by an absolutely stunning goal no less, the Matildas didn’t drop their heads. Unlike a few months back against Chile, where they did. Here, it merely looked like someone spilt some tea but the Matildas were like “Oh, no worries, the kettle is still boiling, we’ve got plenty more where that came from”. Never say die mentality? Yeah this looks more like it.

Substitutes and Squad Rotation. There were wholesale changes for this game. Was it because Milicic wanted to have a look at more players? Did he think this is our strongest XI? Where they forced? Does Milicic have that much faith in the depth of this squad? Or does Milicic not realise South Korea are one of the really good sides in our game? I don’t have those answers. Yeah it was a funny starting XI, I probably would’ve switched this with the New Zealand starting lineup. However, it worked. Not only did it pull off a spectacular result, but again, players who would normally be ran ragged with two 90 minute games, were given good spells on the bench. Whilst others got starts when ordinarily they’d be stuck warming the bench all tournament. Throw in some minutes to players who are on the cusp of the squad, and you’ve got a very different mentality to that of previous times. I love it. It worked. Even if it didn’t, this is a tournament to experiment, work on different combinations, try something new and give players minutes. Oh also, each game so far there has been a goal scored by a substitution. That’s decent numbers demonstrating the shift of match dynamic the substitutions are forcing. Here’s to more of that in the lead up to the World Cup.