Ok. We need to talk. You stick with your team through thick and thin. Definitely more so at a tournament like the World Cup. When your side puts in an average, verging on very poor performance, you’ve got to find that balance between realism and optimism. Losing by an Italian come back, by an extra-time goal, is one of these times. So. Here goes. 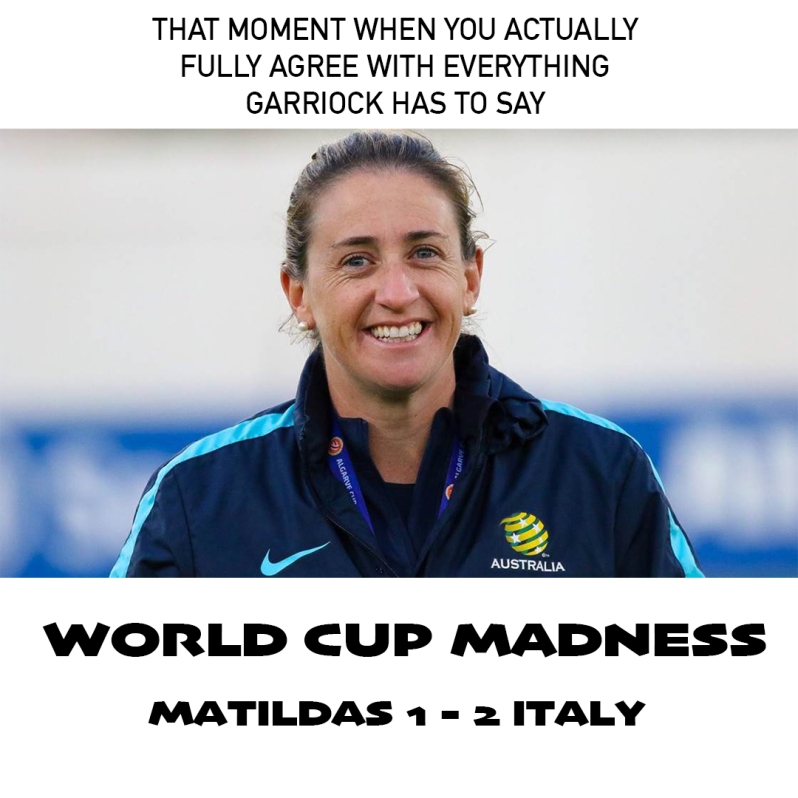 It was few and far between. But one shining light for me was Carpenter down the right. I know, I know. For SO LONG I’ve absolutely slatted her. But Carpenter was the only one for some long, hot moments there bringing the ball out of defence and into attack. Not only this, but Italy were looking to expose the right side. Carpenter worked well defensively. By well I mean I wasn’t asking where she’d gone.

Raso and Carpenter on the right flank is a winning combination. Let that be probably the only single thing we don’t place under the microscope for this match.

Bonansea. Look there’s not much more I can say on the Matildas here, so I’m going to shift the focus on the Italian forward for a bit. Yes Bonansea was called offside often, but gee. She was an absolute terror on the field. She was a player I’d underlined when watching Italy earlier this year. The Italian didn’t disappoint. I want to see her play in the flesh. Just not against the Matildas for a long time ok.

Higher lines than that strange person who wears their pants up underneath their boobs. We could label our defensive line higher than Harry High Pants.

It didn’t work. This tactic needs to change faster than taking off your bra after a long day.

The way we played this meant we had little space to get in behind, as Italy made sure to sit deep to give themselves space on the ball. After doing their homework, sitting deep against our fast forwards was the obvious thing to do without the ball too.

Not only was it the wrong move to implement a high line against a side who LOVE the long ball, it was because our defenders are overly familiar to it. In the W-League there isn’t a side who plays with such a high line. I’d argue none of the teams in the NWSL with Aussies play that style either. It’s meant we’ve got defenders who are lost, with no one commanding the show back there and it’s worse than a ship without a captain.

There’s a host of other things to knit-pick here. You’ve got Van Egmond once again deployed at defensive midfield, a known liability at number six. The choice of substitutions were more puzzling than putting together a 10,000 piece puzzle in the dark. Creating opportunities? If it wasn’t coming from the right flank, it probably wasn’t coming.

WHERE TO FROM HERE

That’s the massive question. The biggest thing is how we set up in defence. Yeah you could argue we need to score. But, a championship side is won by defence. Add on the Matildas have some of the most in form forwards in the world at club level, and goals will come. But they won’t until the ship is shored. Serious questions and analysis needs to go into how we set up defensively. The high press might have been a good idea. But the reality isn’t good. There needs to be a reassessment (preferably should’ve been after the Netherlands game, but better late than never), and shift to a style more suited to the defenders we have at our disposal.

I’m sure many more points will come up as I’m about to tune in to watch England play their neighbors Scotland. However, that can be saved for the Brazil preview yeah.

The Kids Can Play
Olivia Young. 250 games and a banger to celebrate for University. It wasn’t a fairytale finish with Taroona wrestling back ahead to finish 4-2 despite a mammoth effort from the Bees in the Statewide Cup.
What a finish.
Lights, camera, action
ELECTRIFYING
Sold out, 100 days out