Blessed. This weekend we have been blessed by the football gods. The Matildas got to play again in Geelong against a stronger looking Chinese side. And the W-League produced brilliance again. Should there have been a round during international break? Especially with the number of Matildas playing in the league? Well I, and many others, believe that yeah there probably should be. But hey, purely for selfish reasons of getting to watch an extra game this weekend, I’m glad I got to see Canberra United v Perth Glory.

If there is one place and one team I have watched the most since the beginning of the W-League, it is probably Canberra United at McKellar Park. Legit so many memories as a teenager sitting on the couch watching Canberra play in the same heat I grew up in, in country NSW. This season there hasn’t been the chance to watch Canberra at all, let alone at McKellar Park. And man, this game reminds me how much I love watching this team play there.

First Half
Canberra are a completely different looking outfit this season compared to years past. But despite all my doubts they looked like the usual type of team the competition have got use to from Canberra, compact in defence and flipping fast in attack. Meanwhile, Perth, we have all seen what they are capable of this season. Even without internationals Sam Kerr and Raque Rodriguez, they are a side capable of very good things.

The start of the game saw both teams struggling to really control the tempo of the game. Both sides getting pushing early on, but it was Canberra who got the early breakthrough. In the eighteenth minute Grace Maher produced a neat finish off an excellent passage of team play. Centre back Toni Pressley received the ball off an overlapping run down the right flank to cross the ball to the top of the penalty box for Whittal to turn, slide the ball to Maher who pulls off the shot despite the three Perth players surrounding her.

After the goal, Canberra seemed to find their groove, pressing high when the opportunity presented itself and easily spreading play when in possession to pull the Perth defence all over the shock. Perth struggled to keep up once Canberra got some wind into their sails after the goal.

Perth’s chances were limited to counter attacks. For the most part, Canberra looked to deal with these easily by simply outnumbering the Perth attackers. However, after much persistence by Rachel Hill towards the end of the half, she found the equaliser. Creating a chance from very little, Hill’s ability to turn her defender and produce a stunning finish demonstrates once again she is probably one of the best finishers in the W-League right now.

Going in at one all, Canberra ought to have been spewing. Canberra looked sublime, especially their import Elise Thorsnes settling in very quickly, having been in Australia less than a week. Meanwhile Perth were struggling through the middle of the park, severely missing Raque Rodriguez and Nicki Statton and just weren’t able to get the ball to Nicola Bolger to produce enough chances for their forwards.

Goals. The second half of this game had some flipping good goals.

The first goal was Canberra’s and brought a halt to Perth’s early efforts and attacking play. For Canberra this was a goal vindicating their commitment to fight for those second balls in their attacking third. After some scrappy play and the ball bobbling around the top of the box, Sayer was able to get a beauty chipped into the top corner of the net with her first touch.

Again Perth’s inability to properly clear the ball from their defensive area, despite winning the initial challenge, proved to come back to haunt them for Canberra’s third goal. I’m a fan of defenders goals, massive fan. Most defenders goals are scrappy and often a result of a dead ball situation. This goal by seasoned defender Laura Bassett was no classic defenders, scrappy-go-lucky goal, this goal was class. After the ball wasn’t cleared by Perth’s defence properly, the ball some how fell for Bassett to produce a thunder strike from 25 yards out to rip the ball into the bottom left hand corner.

Perth’s defence struggled to deal with the combination play found on Canberra’s flanks through the second half. Meanwhile on the other end Hill seemed to be running out of options and whack bam into a brick wall that is Canberra’s defence.

In comes youngster Lexie Monero for Perth. And whilst she may not have been able to completely change the game, she was able to provide Perth some constellation with a goal from a free kick with five minutes remaining. The goal was messy, with the ball floating through a raft of players from both sides before it somehow got into the back of the net having had no interference. But a goal is a goal, and allows for an excellent debut by the young Monero.

Unfortunately Perth’s late goal wasn’t enough to sway the game in their favour, with the final result going to Canberra 3 – 2.

Final Thoughts
I have to eat my words. I wrote Canberra off early this season. With the many changes of personnel over the off season, I thought they had been lucky to sneak a win in the last two games and that Perth would walk over them. However, Canberra are contenders this season. Could they get the same result had both squads been at full strength, gaining their missing internationals? I don’t know because they didn’t have to. They looked solid defensively and Thorsnes looks like a brilliant signing for them, legit, an attack with the pace and smarts of all three Thorsnes, Ash Sykes and Michelle Heyman is super scary but I want to see it.

Meanwhile, this isn’t a terrible result for Perth, but this game did demonstrate their midfield needs to be stronger. With the players likely to come back into the squad over the week they will be stronger. Also Sam Kerr will be back. If the midfield doesn’t get ticking, they still have the most inform forward in the world right now to cover that up.

Photo of the Round

During the Melbourne Victory v Western Sydney Wanderers game, there was a storm delay which produced this magnificent photo. (@GettySport Twitter) 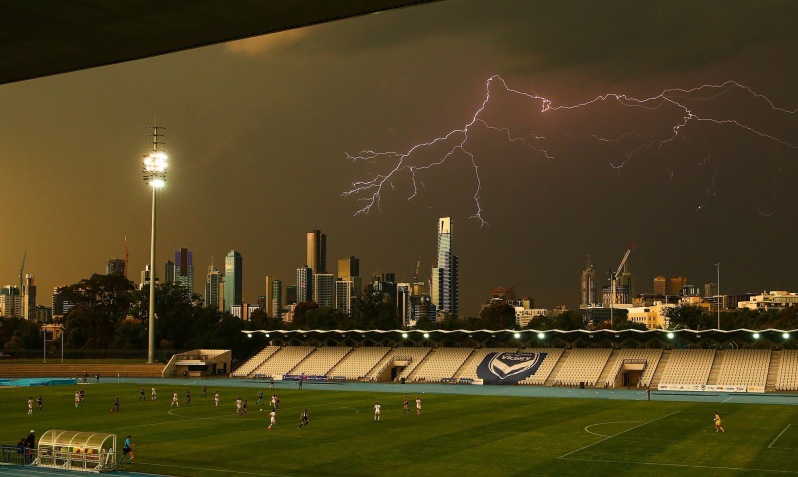