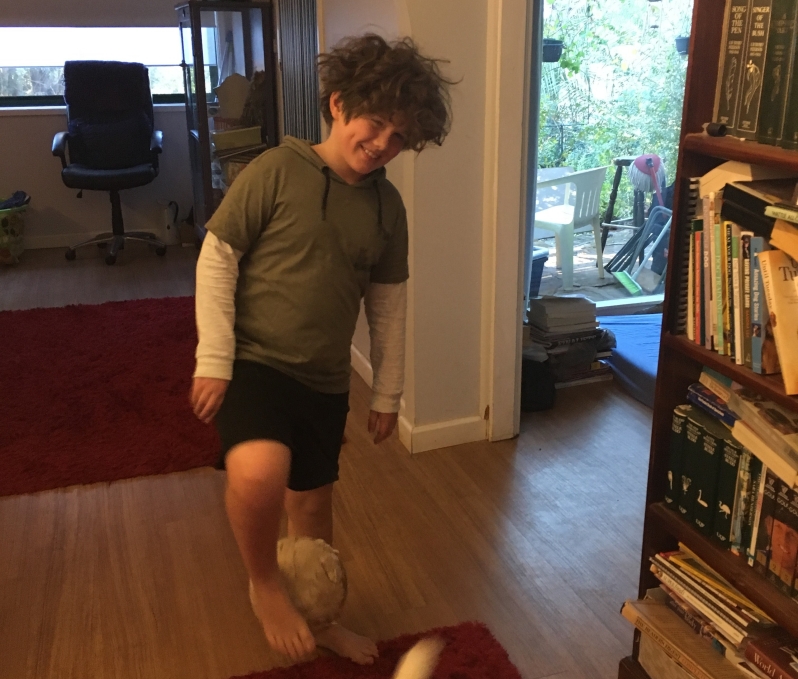 Since the time I knew my Uncle was marrying a Brazilian I’ve been patiently waiting for this day. The day I get to watch a Brazilian World Cup game with my cousins. Ok, so I was like seven at the time, but I knew having a Brazilian Aunty meant having half Brazilian cousins, which meant at some point this had to inevitably occur. Whilst the hope has faded at times, especially since my older cousin is like my twin brother, meaning they have little to no interest in the beautiful game, some 12 years later the opportunity FINALLY occurs with my younger cousin, Ben. Ben is 9 years old, so really this is the first World Cup we can really bond over. I’m excited.

So I arrive at Sydney, head to my Nan’s place, he’s staying the night too after my uncle dropped him over. This wasn’t scripted. This is fate. An evening of mucking around with a soccer ball, where I’ve got a head cold so I mostly just try to hide from all the noise since the kid’s got energy to burn, and we decide to get up at 4am to watch the big one. Brazil in the quarter finals.

Alarm clocks go off, I nudge my cousin awake. The first half comes and goes with Belgium getting their two goals to be ahead. We’re barely awake. But still shook Brazil are that far behind at halftime. Both of us are trying to follow what’s going on with half open eyes. And even with half open eyes we know Belgium have been the side to take chances whilst Brazil haven’t. Thank goodness for halftime replenishments.

Halftime toast and tea with an appetiser of a mini m&m’s packet is on the cards. He made the first move, bringing out chocolate from the stash both he and I are rapidly deplenishing from my Nans fridge. I then realise I’m the adult and that we should get something nutritious and warm for the second half. These half time moves made for a far more interesting second half for the pair of us. Here are the highlights.

Ben: “I hate belgium, I am kinda belgium”
He’s got a quarter Belgium in him too the poor dude, meanwhile I’m sitting there Australian/English with no true blood loyalties to either side.

“Why are they passing it back to the keeper all the time?”
He also loves Barcelona and Messi. I hope he’s not gutted the day he realises they also like to pass the ball to the feet of their own goalkeeper too.

“It’s a penalty!”
Anytime a Brazilian goes down in the box. Pity the ref doesn’t think the same way.

“Sub the goalkeeper!”
The Belgium keeper is just that good, meaning he should totally be subbed out to give Brazil a chance

“The goalie wouldn’t stand a chance against Messi or Ronaldo”
Those two players have cult status in many peoples hearts, this includes my cousins.

Brazil get a goal back. Inevitably when this occurs it is the one time Ben leaves the room, he went to free Lucy to bring her into the lounge room with us (Lucy is our Nan’s Labrador). When he came back in after me yelling he’d missed their goal, “told you they had a slight chance… ah that was brilliant, let’s go! Finally that goalie is…” I’m gonna presume he meant finally the goalie isn’t good enough to stop the ball, and not something about how he should have been subbed off at halftime had Ben had his way.

The caffeine from the tea kicks in, so Ben starts demonstrating head butts to me from soccer YouTube clips he’s seen.

“Brazil don’t have a chance.”
It’s 85 minutes, I need to teach him the ways of last minute goals and how every supporter believes it’s possible to win a match until the final whistle, and then to blame the ref for blowing that final whistle too early if a goal isn’t found.

At some point in the last 5-10 minutes I wind up showing Ben the Alana Kennedy and Carli Lloyd halfway goals. He’s impressed.

“Lose. Lose. They’re gonna come back in 2022 though.”
This is how we deal with the loss the final whistle brings us.

It’s the end of the night, Ben is coming up with his team of 11, I throw him names of a few of my favourite players who are women. Ben doesn’t flinch, simply just adds them to his chosen 11. I then ask him whether he knows Sam Kerr and her goal celebrations. He does. My job here is done guys.

Until 2022 Brazil, we’ll catch you then. Although unbeknown to Ben quite yet is if I’m anywhere near Sydney during next years World Cup, we will be watching Brazil a hell of a lot sooner on the world stage than 2022 and hopefully it won’t involve tearing our Aussie hearts apart in the process.

CHAMPIONS || VICTORY
5-2
The planning begins as the host cities for the Women’s World Cup have been announced.
The shiny, illusion dinner plate has finally arrive at the table for Sydney FC.
LATE NIGHT ANNOUNCEMENT || Matildas lock in match against Germany
Still recovering from 4 games and driving the length of Tasmania on Sunday.