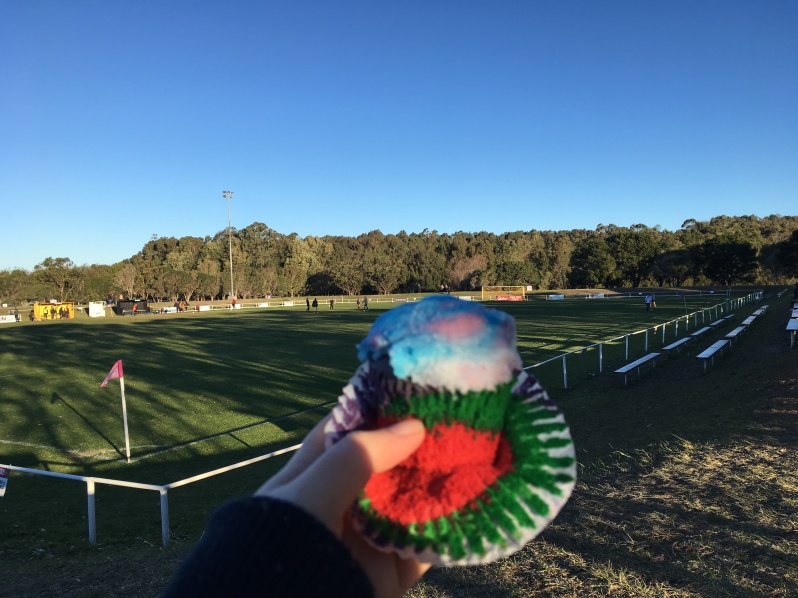 What’s better than footy on a sunny, albeit really windy, Sunday afternoon? I’ll tell you. It’s having your Nan come along for the trip. So this Match Day Monday is brought to you by more NSW’s adventures, this time with my Nan and going to watch Illawarra Stingrays take on Macarthur Rams.

We left Campbelltown to adventure down to Wollongong early because firstly we needed to make a stop at the Appin bakery for a killer pie (additionally Nan shouted a delicious, rainbow cupcake), secondly because my navigation skills of Wollongong are on the same level as being stuck in a maze with no light. Don’t ask how, I just can never pick the right exit so wind up creating an unnecessary, usually residential, detour.

Eventually we get there, armed with lukewarm pies, rainbow cupcakes and jackets. Thank goodness for the jackets.

We find a spot, thinking as all the ones in the sun more or less are taken, so the shade with the seats are the next best option, (note for the future, they weren’t). Pretty quickly once the game begins it becomes clear my Nan, who in fact lives in the Macarthur area, is not going for the Rams, but for the pink side, the old Stingrays. The reasoning? They looked the smaller side. I now secretly suspect it’s because she knew they were gonna win and wanted to back a winning horse, but I may never get proof of this.

I quickly learn that soccer isn’t learnt through osmosis by simply being around people who love the game, especially as I go on to answer my Nan’s questions of:

“Who’s the one in the different kit and using their hands?”, the goalie, one of my old positions (though didn’t say the later part as I’ve probably played every position at some point, so no reason to confuse her).

“Why aren’t they using their hands and heading the ball instead?” Ok so this one was just because she got momentarily confused between soccer and AFL, so that was quickly recognised and the answer resolved.

“Who’s the one wearing the black?” The ref Nan, they’re the boss yeah.

Despite some early promise and a high press by the Rams, it was the Stingrays who got the early breakthrough with a goal. I’m pretty certain the goal was a result of my Nan saying they were playing well mere moments prior, and for the Stingrays to reciprocate by deciding to really put a show on for her.

With a goal under their belt, the Stingrays had their head in the game. They were able to capitalise on their chances and got a second before the break off a corner. Meanwhile I was explaining how offsides work to Nan when she asked why the Rams players weren’t in the space in front of goal (the rules don’t like goal hangers unfortunately Nan).

Half time happens, we decide to move and find a spot with a smidgen more sun to it, as it became clear I brought the Tassie weather to the mainland considering the winds of the first half.

As my cupcake was finished, the second half begun. The Stingrays brought it the second half. Their directness to goal, high defensive line, ability to block any dangerous through balls, plus their hunger for the game was apparent. In the words of Nan, “the pink side just always seem to have the ball!” The Stingrays get off the mark first after the break, pulling three goals ahead. Suddenly the Rams decided to play, and whilst there was a little confusion in the stands between myself and Nan in regards to which goal they were meant to be going towards, changing sides at halftime can lead to that type of confusion ok, just ask any honest referee, the Rams finally found their goal and pulled one back.

It’s 3-1, still with sometime to play, but my Nan’s on the sideline wanting more goals! I decide not to tell her most games are lucky to have 4 goals before the hour mark because heck, I wanted more goals too. As my Nan foretold of the first goal for the Stingrays moments before it happened, she too foretold of this game having more goals. Hannah Beard decided to give us a show, getting a late double to give the Stingrays a 5-1 victory. Legit, the last goal was a delight of some good combination passing in front of the Rams defensive line, a first touch fumble-turn lucky bounce and pace to get one on one with the Rams keeper to then put the ball with precision into the bottom corner.

Witnessing six goals we were satisfied. So much so that near the dying stages of the match, the Stingrays, the side Nan wanted to see get all the goals, had a chance saved on the line. My Nans reaction by this point? Mercy for the Rams “the pink side have enough goals already”. After praying for the final whistle because we had lost feeling in our fingers and faces, the ref too grants us mercy by calling full time.

My Nan: “It was a pretty close game, no one steamrolled it, but the pink side did well to get goals”, easy there Nan, that type of analysis may see me asking you to write up some soccer blogs for me.

Mine: Organisation in the back and pace in the front won this for the Stingrays, despite this seeing a couple of the balls and ideas Kylie Ledbrook and Teresa Polias were coming up with in the rare moments the Rams were creating things was magic to watch at a local game, just complete magic.

Anyway my Nan has now watched a soccer game live. She definitely loves me, doubt most people uninterested in the sport would come on such a long car drive and stay around in the cold weather otherwise. So MVP of the day goes to my Nan. Didn’t kick a soccer ball but now knows she wouldn’t be able to pick it up with her hands had she been playing.