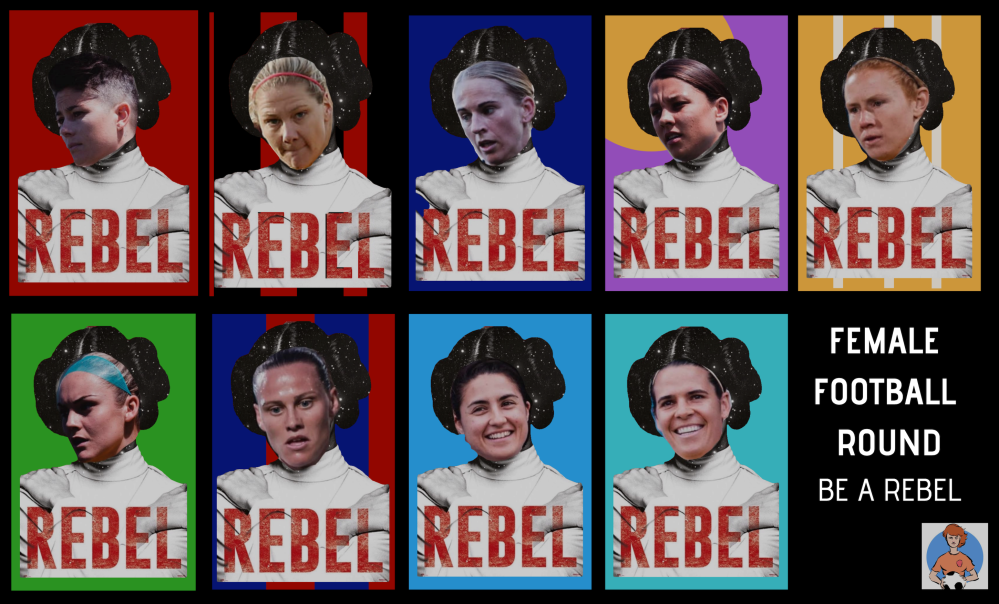 Growing up I wasn’t much of a rebel. Don’t get me wrong, I kind of always wanted to be, but honestly it was all too much of a distraction from my one track mind of football. Still, pirates always had this alluring aura around them when I was younger, because they rebelled and took that rebellion to the seas and far away lands. Since, I’ve now realised being a rebel, or joining a rebellion, has both sharp contrasts and similarities to the pirate rebellions I dreamed of in my youth. I’ve come to learn of rebellions that are a result of fighting against injustice to seek fairness. Rebellions that take one person to be fed up and to demand change. Then for a bunch of people to come alongside and be willing to be part of the new uprising that can create the momentum for change. I’ve since come to learn I can be that rebel fighting for justice, equality and fairness. I know so many other people who want to be, and are that rebel too.

Why am I talking rebels? Because it’s Rebel Female Football Week. I know, I know, Rebel is the sponsor for the week, making it brilliant for those monetary and business reasons, and not to hint at an upcoming revolution. But I think it’s apt that female football week has a brand called “Rebel” sponsoring it. It’s important to know what our sport, and others, have done in so called “rebellion” by the establishment to fight for opportunities, chances and fairness. So, to mark Rebel Female Football Week, I’m going to take you on a ride of a few rebellions.

Side note, this is to every mum, especially my own, who are the ever rebels and persistent voices in many daughter’s ears saying “start a petition” or generally telling us to bring down the establishment (or maybe that’s just my mum?).

Of course, I’m going to kick this off with the Matildas, do you really expect anything more? But ok, let me tell you a story. In 2015, I was in the midst of changing things up, starting a law degree, moving across a sea to the big smoke and refinding my love for football. You see the 2015 World Cup in Canada reignited my love for football generally. It was a place where the Matildas beat Brazil, I went through heartbreak for both the Matildas and England at the hands of Japan and getting to witness the magic hattrick by Carli Lloyd in the flipping final. However, my love and undying passion on the Matildas cause really caught flame soon after the 2015 World Cup.

The Matildas were meant to go on a tour of the US soon after the World Cup. If you caught the block buster that was the group match between the two matches, or any match since for that matter, you would understand this was something to put in the calendar and look forward to. However, right before the matches were scheduled to play, news was the Matildas were going on strike. Strike is a big play. I know teachers go on strike sometimes, but for an international side to go on strike before some lucrative friendlies means something bigger. Not only was I watching TV and suddenly the Matildas on for non-footballing reasons, they were on the TV and in the press because they were demanding a better go of things. The side decided to not play football, because they wanted better, not just for themselves, but for generations to come and for those playing domestically at the highest level.

For me, this was an even better gold than the green and gold the Matildas wear. The side I support wants to rebel. They are organised enough, and care to such an extent about the bigger picture they sacrificed an opportunity to play against the World Cup winners, all to see a shift at home.

Guess what? The Matildas succeeded. Sure the US tour was called off. But ultimately, the side secured a much better deal and benefits, that extended beyond the current Matildas set up and is felt through to the W-League. Sure no-one is becoming a millionaire off women’s football in Australia anytime soon, but it’s a huge step in the right direction and is something that continues to be built off.

You’re probably not meant to pick a favourite rebellion, but I will. Just for the way the US Women’s Ice Hockey side went about their rebellion before a Championship Tournament that was in the lead up to the Winter Olympics, this has to be my pick.

They capitalised on social media. Oh children of the internet (thanks Ann Odong for that tweeted phrase earlier this morning).

The side were fed up of contract negotiations stalling and only receiving measly pay for the full time profession that is being a pro-athlete. To really get the attention of the organisation, they produced a multi-faceted campaign. A sign of true rebels. They were organised, getting everyone behind their action, from the captain, to the first string side, all through to the reserves and women’s hockey community widely. The cohesion ran so deep, that the threatened strike had Ice Hockey US searching for players to fill the side, with reports stating they would need to go as deep as junior college or high school kids to fill the roster. Everyone was on board. They took to social media to make the message clear for all. Essentially they made it clear that women’s hockey wasn’t being taken seriously, there needs to be change, join in with us to demand better and lets get this sorted so the playing can continue.

I, a non-ice-hockey person, woke up one morning to my Twitter filled with “be bold” statements and photos of ice hockey players. The message even made its way down to little old Tassie. I got excited. REBELLION. For some reason, I was out at my mum’s when it was happening, and by the time we had our breakfast and tea happening, I had found out everything I needed to know about this rebellion, to then carry on to my mum about it and have the usual rant of the general injustices all too often found in women’s sport.

Again, this rebellion produced success. The national team players are now paid better, and whilst I don’t know the ins and outs of the deal, a women’s committee has been established to advise their organisation, in a move the players hope means they no longer will have to threaten strikes or go to the lengths of recent past.

Afghanistan’s Women’s National Team is a story and a half of rebellion and fight. I don’t know the half of it, but what I do know is there have been some amazing women, both in Afghanistan and abroad, fighting for women to play football. I’ve been hearing some really exciting snippets of things coming out of all of this. Even seeing just the basics of the side competing in tournaments and a commitment to see the game grow there has been brilliant.

That’s why it hurt my heart this week to see Afghan captain, Shabnam Mobarez write on Twitter about her having to decide on playing for her national or signing a contract that “would take away the rights I have both as a player and female representing my country”. A decision like Mobarez has had to make sucks. No one should have to decide between playing for their nation and fundamental freedom rights.

Like I said, I don’t know the half of the fight going on in Afghanistan’s football, despite trying to read anything I can get my hands on for this. Of course, there remains much greater issues at play than solely football here. However, football continues to be a good indicator of the justices in the population at large, and I’m totally here to fight and support in whatever capacity so I can see Afghanistan bring it to the Matildas in a future Asian Cup.

There are still rebellions to be had. Mobarez and for the Afghanistan Women’s Nationals Team is just one. Others are to ensure women are represented at all levels and in all capacities of our game (hello Heather Reid on the newly appointed Football Australia board, I see you and am beyond excited for the rebellion you’ll bring there). Another might just be to ensure our local women’s teams are receiving the same support and benefits our men’s teams receive.

So. Get your rebel on. Join the rebellion.