A game against the host is no easy task. Yet the Junior Matildas have come out with a win in style. A whopping 6-1 victory. The stunning part? All the goal scorers bagged a double. Talk about making patterns.

It’s now midnight, but here’s a look at how the match was overall, a couple players who caught my eye and the most important thing. The goals. 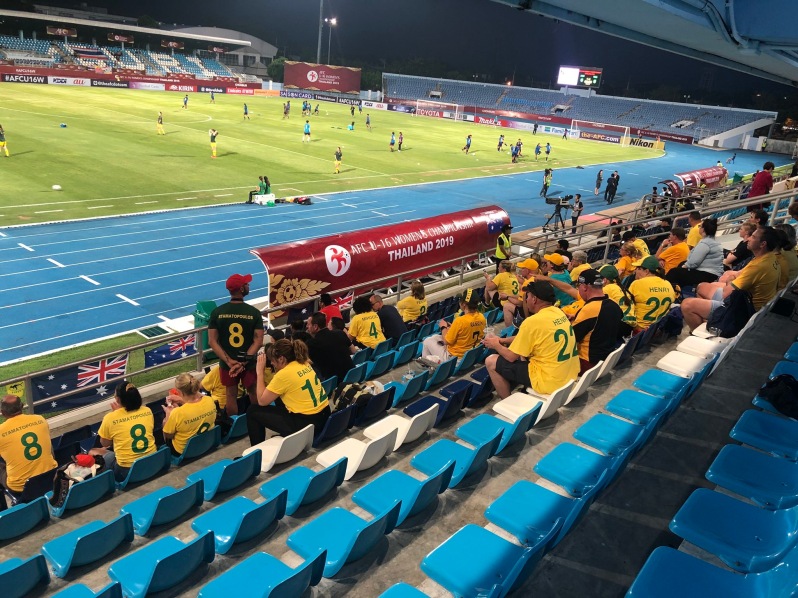 Thanks to Brad Jones for the photo! This must have been taken moments before it bucketed it down.

The ability to work the ball out of tight spaces, under pressure in defence is for all to see early in the half. The side unpicked a high Thai press in the early minutes to create a surge forward. A joy to watch. The sides cohesiveness understanding of each other and technical skill on display for all to see.

The one massive note to put on the report card following this match is the direct play the Junior Matildas employ. They head towards goal with the same intent I head towards my local Italian place for delicious takeaway past after a long day at work. While crafty combinations may be played in the process, the intent to move forward puts the shine on this side.

At its best, the Junior Matildas move the ball forward quickly, find players in open pockets of space who are daring to take on a defender one on one and head towards goal. At its worst? The side is exposed to a turn over and flip of the tables, as their opponent can pick apart pockets of space left in the pursuit to the other end.

Yeah. Some opportunities in front of goal were squandered. Some passes lacklustre, resulting in an easy turn over. But. The job was done in style and grace. Another one for the back pocket and to be proud of as this generation of players look to forge their style of play in a convincing manner.

Paige Zois. Playing at holding midfield, Zois looked to be part of everything. She was a terrier protecting the back line by breaking up play with essential challenges. Her vision on the ball was just as good, finding passes and really enforcing the Junior Matildas mantra of positive football. Add in a couple of shots from distance, that had the legs and with a little more luck would’ve hit the back of the net it’s hard to fault the midfielder.

Jamilla Rakin. Situated on the left for much of the match, Rakin showed how it’s done with putting the ball by putting the ball into the area. Timely crosses saw the crafty play notch up an impressive hat trick of assists. Not only was she quality going forward, towards the end of the match she slotted in deeper on the park and didn’t look out of place, especially with some cutting long passes out from defence.

4” Alana Jancevski. While the right sided forward claimed the goal, it was the work of Mihocic who made it utterly dreamy. The centre back produced a pass to break Thailand’s lines and find Jancevski off the shoulder of her defender. Jancevski, with plenty of room to maneuver, didn’t need to be asked twice, finding her scoring boots early.

27” Hana Lowry. It was awkward, the touch by the Australians number 10 more a sort of deflection, but the end product produced the goods. An awkward, lobby chip the goal. Rankin’s ball into the box from the left flank showing how important it is just to get the ball into the area.

45+1” Jancevski. Another time where Rankin put the ball into the area. The heavens had opened, the pitch slippery and Thailand’s keeper fumbled the cross. Facing the pressure of Charlize Rule and Jancevski, it was Jancevski who found the finish.

45+3” Lowry. It comes in twos for the first half, with Lowry finding the type of finesse goal she was searching for throughout the match. The side’s forward players working the game plan to a tee with this one. A well worked press moments earlier had seen the Junior Tillies force the turn over, some nice nifty passing found Lowry with the ball at feet. Opening up to her left foot, there was only ever one option. A curler into the far post.

50” Georgia Beaumont. Another Rankin cross, another goal. This time it’s Baumont who simply had to nod the ball into the net with a header.

59” Beaumont. The substitution was hungry to get another on the scoresheet. Using her strength moments earlier to put a ball across the box, she finds her way into the area. Rule chases the initial cross to pump in in again. Beaumont again uses her strength to fend off her defenders and find the back of the net.

70” Thailand, Jinantuya. Caught on the counter. With too many players forward, a ball splitting the centre backs meant Thailand found their opportunity and weren’t going to squander it.  Business carries on.

Captain Jessika Nash on the performance, the “team did well over all..  The goals were well worked as a team”. She was quick to be humble in the face of conceding a sole goal, “we’ll get lessons out of it”

We’ve got Bangladesh. Don’t get too caught up in the scoreline against Japan, Bangladesh won’t be an easy game. But you know what? We’re ready, so who else is keen to watch it with me on Saturday (7pm AEST time)?